How fatiguing are Skirmishes? Non-Grid-Mini Skirmishes aided by Mass Combat

I play airsoft and I'm very much aware of how far I am from what is considered "fit for military duty". In RPGs, my Character is the Hero, not me and his stats are MUCH better than my own. It helps that I try to experiment and play with other airsofters who play RPGs, so the post game discussion tends to be in GURPS stats and checks.

Fatigue is so important, that I find even computer games that have no stat or way to measure it nerfed. Every tactical decision is influence by one's energy reserves. It is a grave miscalculation to be fatigued too badly that you can't shoot, think, or talk straight when performing an action. In the case of commanders, soldiers will often say yes even when they can't perform the action. The spirit may be willing but the flesh is weak, when commanders ignore obvious signs of fatigue when leading troops, this can easily lead to disaster.

Skirmishes are very fatiguing, even in GURPS stats there are many factors the game system has left OPTIONAL but GMs can put back on the table if they want players to really appreciate the Fitness and Difficulty the tasks their Heroic characters are performing. In the end all these feats are appreciated Relatively to what the GM and the Players can communicate.

Bad Terrain:
Soft Foliage can hamper movement. These long grasses pull at limbs and any piece of equipment that can be snagged. Sometimes these plants, combined, can be as tough as rope requiring blades to clear a path.

Ruling. The GM can just add encumbrance or FP cost to movement.

Uneven ground and Encumbrance can break the smaller bones in the ankles or trip and fall to sharp rocks that can wound or worse: break equipment.

Ruling. Jumping may be necessary to overcome this quickly, at least at 3/4ths max speed. Thats a DX check or a Per Check, also apply the Enc penalty. Its worth a PC's while to invest 2cp for a +1 to Jumping in this case. This counts as Sprinting and fatigues just as much.

Ruling. No Per check or Dex Save, when on a Run. Half of Full move, -2 to -4 Per or Dex depending on conditions. Characters may want to Jump to avoid places all together, go back to ruling above.

Footing and Inclines. The steeper the incline the more difficult the footing. Loose dirt or grass can make things slippery.

Ruling. This requires extra effort to plow upward, +1FP cost, or Dex Checks affected by Incline penalty and Equipment. -5 is hard, anything that in the GM's call would give anyone a hard time, -2 for difficult, same call. This is better to rule on experience. Failed Dex requires 1d more seconds.

Skirmishes without the use of hex Grids.
I think skirmishes or combat engagements need more context and ways to resolve without girds or miniatures. Narrative and descriptive methods are difficult because it needs a set of assumptions.

Roles and Assumptions:
FP costs pretty much dictate tactics, they can also be used to work back details. These are 1 minute FP costs. Skirmishes are moving battles, they are not like duels. Typically these are in minutes and these engagements last only 3d seconds before the battle tide will require a new set of movements or opportunities spring up. Slow and Reserved movements, intended to conserve energy may ignore the FP cost but take x2 to x4 (1d3+1) the amount of time to execute.

Tactics, Discipline (Soldiering, warrior, or Combatant Professional Skill) and Athletic (Mount's athletics) rolls are important in these maneuvers. Leaders tactics (Will for maneuvers that require force of personality to inspire or IQ requires superior organization, or HT requiring the leader have the energy to move around adequately), everyone following rolls Soldier IQ (quickly organize themselves), HT (in a tiring formation and keeping up) or Will (discipline).

Failure depends on context, most common is lost time in delays, catching one's breath, weaknesses, or shuffling into place. In the 3d seconds roll, the element might have to take one less die instead , acting on the end of the worse die result in seconds instead. Crit failure means one less die being able to act on a the number of seconds after the highest die FOR NPCs No action or useless at the moment.

Ex. A roll of 2, 3 and 4. Failure means only 4 and 3 (7) seconds of significant actions, acting only after the first 2 seconds pass. Crit failure means Only 4 seconds of actions.
Feel free to use Mount's movement and HT instead, on a mounted moving skirmish.

Keeping track of things. Again Mass Combat Cards come to mind in keeping track of things. Enemy cards being face down and stacked to hide their numbers only until full visual confirmation, even then requiring a Soldier and Tactics IQ check since there are tactics that are designed to prevent soldiers from knowing the actual force they are fighting (for one's own side and opponents). Dummy or Blank cards are helpful in hiding real force numbers.

If you look at the Spaces created by the Lines, each should be enough to illustrate where are the relative positions of units with cards. 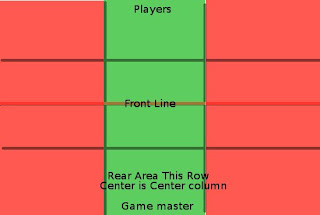 The relative positions point out who can easily move to where.

Posted by justin aquino at 1:35 PM

Email ThisBlogThis!Share to TwitterShare to FacebookShare to Pinterest
Labels: GURPS