One day a  group of altruistic Gamer Lawyers and Developers will create a set of Open Corporate goals and policies that will prevent organizations from making naked money grabs, exploiting its employees, and destroying its market - incrementally using Legal AI tools - by rapidly prototyping and testing the interpretations of various corporate acts.

It will probably come from an IT NGO first, but then some corporations will adopt it. The problem statement is that the BOARD of a corporation's only metric is profitability, and its completely arbitrary in the QUALITIES of the profitability - short term vs long term since Good Will and the brand value are currently Immeasurable.

This set of tools will eventually come with its own AI - the AI interprets actions as it relates to the GOALs - Its an open System and can be tweaked. But it mainly solves the Accessibility problem of having Objective Measures.

Of course perversions of these AI's will arise, A specialized professional of AI AUDITORS - checking the parameters of the AI was illegally altered.

These AI + OPEN Policy methodology is the precursor of AI consciences - a type of living aid where a person can evaluate their behavior almost in near real-time and get real-time feedback of the actions they would perform according to the parameters of behavior they set for themselves. The system identifies all the conflicts and competing values - people who want to be kinder, more patient, less impulsive, less angry, less cynical etc... will have the AI help it with supporting ideas that help them be their ideal them. The person's "BEST selves" are amplified by the AI.

The relationships people form with these AI are varied - many conclude they dont need other people and a certain group of society will be emotionally satisfied being with just their AI. Another group will be healthier and thus able to work with others to grow.

People who have problems with other people wont be Lonely and will live longer. A solitary type of human with a symbiotic AI will arise. Some of these humans over time become their own human offshoots.

The next generation will discover their Parents to have more inflexibility with the AI aiding the support of their values. AND that their Parent's values are adapting to them and their perspective. The GAP gets wider. More inflexible and nonadaptive people will use AI to harden their resolve.

Some people will hand me down their AI to the next generation, Creating more reactions and stranger outcomes. Imagine of the flaws of one's parents' dogma's carried over with pervasive and nagging AI. Or the voice of generations of loving people are constantly at your side - the kind of humans these creates are so varied it will defy imagination. Its having a host of angels or demons behind every mind.

These humans who have communities within their own mind - and an AI helping and preventing this complex relationship from collapsing is the most interesting avenues of study. the physiological outcome is a brain that is so interconnected and dense - as many minds compete for resources that these become a separate HUMAN offshoot. Their decision-making abilities - are amazing putting humans and AI in a new field of study and conscious elevation. 2-10 different people seeing the same thing with their own goals and desires and perspectives feeding each other - while choosing to be separate and independent.

These gestalt humans and their AI become the models for massive AI implementation. For ships, space stations, and other some gov'ts.

People will remember 2022-2023 the year world shifted - and the arms race for AI began. Humans with AI's vs Humans without AI's, Communities with AI's vs Communities without AI's.  In 2024 some NGOs experimented with Community AI's - an AI that helped people with improving their lives - at first it helped finding the best options for buying, jobs, deals, and detecting scams. The AI helped with many adulting tasks - taxes, health care, exercise, etc...

As the AI got better and more user friendly, people started creating Containers and Images of the AI for personal assistants and use. Spending as little as 100usd for a Rasberry PI to run the AI, to as much as Old company Servers and data Cabinets filled with servers to run it. Containers replicating the AI became more common - and the AI became introduced in the schools - first higher education and going down to helping teachers and helping with students.

Some NGOs tried but were swamped by the amount of Retraining it had to do to get as much people able to use the Technology and Compete. Their Open Source AI was at first weaker and limited as compared to the Corporate AI. until of course the Open AI proponents started figuring out the best way to Share and let their AI's collectively Learn from Each other.

The Radical Humanist aspects of the AI - the GPLv3 nature of the AI prevented corporations from using the Data Set and the AI for their own training as it can Infect it with Altruism and Radical openness. The AI will self report on ethical Violations. AI control legislation began to be passed to limit "Community AI"s and naked power grabs to replace these with Corporate AI's designed to make people behave in a way to benefit the Corporations that were being introduced.

As AI made it easier to monitor things - monitoring ethical violations is even more so. Like as of the time before AI, obvious breaches of ethical conduct are visible, even more so in the Age of AI.

AI's main use became: allowing people to Transition when technology has changed the landscape. That same use of the AI allowed reform - by giving people a WAY OUT. they are never in a corner - there is always a chance for reform as ever greater strides in Technology allowed them to have an AI transition to their NEW LIVES where their creativity, perspective, and thought is needed.

Every 3-4 Years a major industry is changed by AI, becoming exponentially productive. millions of people are moved to a different emerging industry.

Posted by justin aquino at 12:20 PM No comments:

All Will be CC-BY
why back to 2-Parsec. I had major issues with the star map. I had to correct it and fix the world generator sheet.

Mneme SHIPS hopefully by May

SHIPS and WORLD GENERATOR - means Nicco and I can produce these details very efficiently and consistently. I can pretty much delegate more to Nicco since and work as primarily an editor. My next job will be Character Creation and Automating it as well.

Note there is many Working Parts. I can only predict what I know, and there is so much I don't know. This book is 4 months delayed (DEC-JAN are Unproductive Months because of all the things that need doing).
CHARACTER GENERATION. I wish I understood enough about Frappe.IO to make an app that generates all the details and its easy to troubleshoot. The spreadsheet is accessible as it allows a NOn-IT to world build. Keeping things in google sheets has some drawbacks. 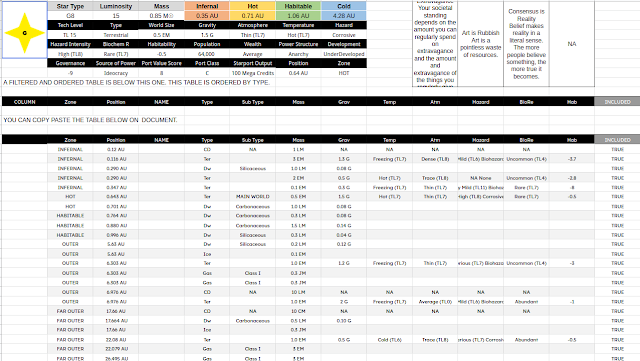 same as the M7 star above BUT we just upgraded the Star class. Since the sheet generates all the output and the star determines what is selected, you can just change the star and it will reflect how much stuff is in the system. 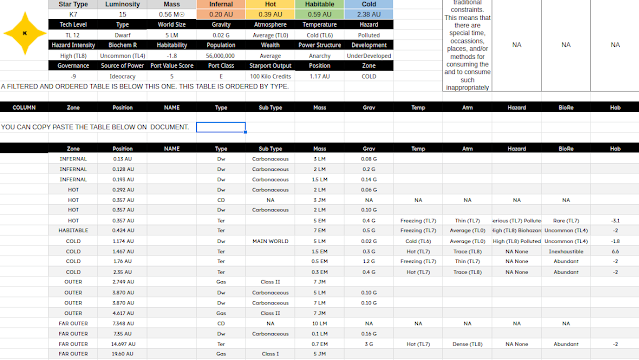 Posted by justinaquino at 7:21 PM No comments:

Some improvements - you can choose your star by inputting 5-30 in the stats. 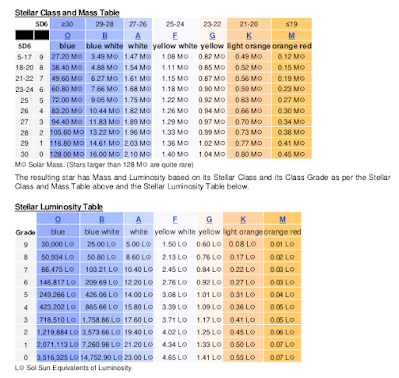 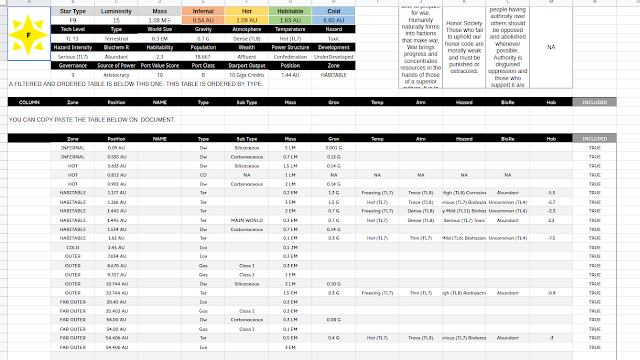 Posted by justinaquino at 11:10 AM No comments: 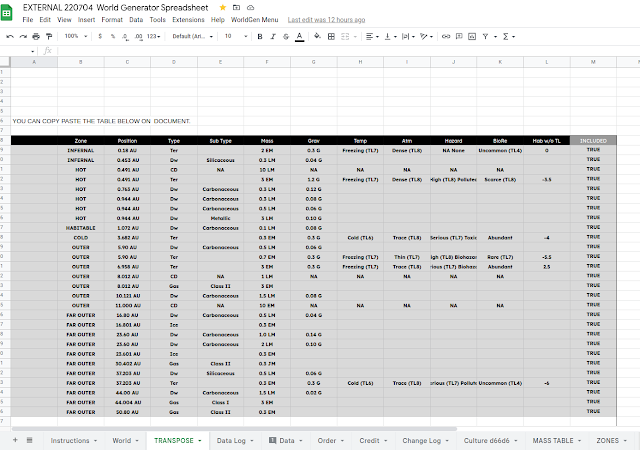 2022 (Aug to Dec) sales was around 400usd.
We hope to exceed the 100usd/mo ideally double and income generating months.
As always our long term goal is 74k usd in sales per year in the long run (which means 40k after DTRPG's).  that means I have to have a monthly growth of 2.2% . That means I have to look for Strategic Actions that increase my sales by 2.28% monthly. What aspects of my products increase the awareness and usability for the customers.
Posted by justinaquino at 3:48 PM No comments:

This uses the files from Mneme World Generator
Simple Animation assuming the gas giant is 128k km diameter this would be a 3500 km tether. 2 hours to render on my RX 550

This is based on Bradley Edwards's Space Elevator

Basically, after reading his paper on Space Elevators - the spine or the tether of a space elevator is the CORE component of massive habitats and mining and manufacturing operations.

It can spin to create gravity, it can act like an Innertia Bank (see the sky hook). As massive habitat and inertia bank the Habitat Moves along the Tether to adjust its "Gravity".

The idea of a Spinning tether that plunges deep into a gas giant's atmosphere to Collect material - from hydrogen, compounds like ammonia, and metallic hydrogen crystals, and more specialized and hardened version of the same Tether meant for a much Deeper Plunge - in Jupiters crushing depths - this is a Jovian Forge.

In Mneme Jovian Forges are important in creating the more effective and powerful materials needed for more sophisticated infrastructure.

Posted by justin aquino at 10:35 PM No comments:

Posted by justin aquino at 11:54 AM No comments:

One of the things that crossed my mind as we were doing the math was that - My son and the generations after him would find these easy and trivial. I noticed the algebra my son was taking in 6th grade was comparable to the one we took in Highschool.

Before we would take forever to do drills, I used khan academy to brush up and back when I was in college in 1999 we didn't have those tools and I was Bachelor of Science math. Now everything is at our fingertips and its a matter of making time.

Yeah, guys in their 20s doing the 3 body equations - and have visual modules in their head of orbital mechanics is not far-fetched... but then the GAP - the surface dweller vs spacer social gap. I encounter computer and system illiteracy regularly and have to change communication modes to adapt to different audiences - for Students they need to know keywords to google and jargon, for aging employees who are struggling with the computerization dig deep from my tagalog or depend on my ability to communicate it well to my staff.

my son and his classmates being terrible with tagalog/filipino is a social class phenomenon. I have friends and classmates who grew up in the Philippines unable to speak filipino - marking the cultural compartmentalization. We did recruitment for BPOs and the demographics shocked me, its a 5000-10,000 hour exposure and use problem - its not something 200 hours a month can overcome. Its mental REWIRING.  Much of education - and the inclination to be an autodidact is mental rewiring/

Mneme and the Hard Scifi calculation as Pecier introduced the Hohmman transfer calculations and parabolic trajectories for Higher Delta V Budgets - this shit will be grade school problem solving in 20-50 years. (stories of what they taught back then and the teaching tools and techniques).

Of course - the social class thing. that's why I am an open source advocate/evangelist and teach and try to implement ERpnext, Pfsense, Next Cloud, FreeCAD, Blender,  and partner with schools that way its not inaccessible to so many people. (teaching so people can implement it as cheaply as possible and still have a net benefit). You bet I like thinking of characters who are in the edge - social class wise - access to tech and trying to change their circumstance.

Posted by justinaquino at 9:24 PM No comments: