Sins of the Crusade Episode 03, Season 02

Thanks to +Il Pella , +Wilton Heath , +Dan Mungham , and +Mike Dulay for playing.

After the events in Taranto, we fast forward 3 months (mid May to mid August) as the Party has made arrangements to Sail to Constantinople despite the Summer Weather. Bohemmond and the party manage to settle their extradition, with promises of Doux-some title*  they travel east to formalize Bohemmonds oaths to the eemperorand earn his rightful inheritance from his father, Robert Guiscard, which is all the lands east of Italy.

The party made many arrangements and relationships changed and evolved. Tertius and Xeno's men have increased in number, although they still bring around their core and elite band with them when they can. Cato has increased in status, earning the confidence and place of confesor to the man who tortured him and brought him to ill health, Baron Dominic of Matera.

Joining them is the household of Lady Olena and many of the cast who may have bailed Taranto ship. Behind the Scenes - prior to leaving, the estates were "mortgage" to the Church at the desired amount need to campaign. This is roughly the entire "Net Income" of the estates and the monopolies for 5 years (an arbitrary number). With Papal officers as hostages they were able to get the money and leave behind Taranto and Matera to finance their new campaign abroad.

When the Party arrived there were many who greeted them (agents and solicitors), particularly Agents of various Houses. Xander (short for Alexios, because there are MANY  men named Alexios in greek since Alexander the great) of Dalassenos who offered the Emperor's courtesy. There was an exchange and Cato decided he would rather be in his more modest household than to be isolated in the Emperors' Guest palace. The rest of the lesser Agents and Solicitors were turned away.

Xeno arranged for his men, and let them loose under the guidance of Miroclones. They were all to rest for the months of journey they endured and to rebuild morale and confidence. Xeno went to explore the City an Berthold with him, they were looking for answers to questions about the events in Symrna that led to his capture and enslavement.

Xeno and Berthold had to dodge spies, a common pest found in byzantine court. Naturally very cunning, they were able to conceal their movements and finally disappeared into the crowds of Constantinople. They met with Marten of Bucarri, a retired captain who had a very politically neutral reputation. he had no great commission, but did not have many enemies. Xeno knows he is not clean, but cannot say he was dirty from the stories he heard as he served in the Navy.

Marten received them with great skepticism and suspicion. Still he listened, as something about Xeno made him a credible man despite his undisciplined appearance. Xeno talked about Symrna and the raid that happened 8 years ago (1084) when Tzarchas attacked and captured the strategic city and port. Marten has little to say to Xeno except that his story would have bring great interest to one of the generals, and the first one to approach him about it he should tell Marten.**

When they left Marten they stumbled on a high born youth and lady who were being harassed by thugs. Xeno made them out as soldiers, and approached them while Berthold covered him with his bow. Xenos' voice carried across the busy square and people turned to look, the soldiers were cowed and could not make their move when the attention was all on them. They made their presence scarce. The Lady thanked him, and asked to speak with them in private as they were one of the many solicitors who sought Bohemon's audience.

Xeno brought them to his ship. Where they talked, he learned he was Peter and Lady Belanca of Aaranal. It was a mother, a distractedly attractive lady, pleading for a commission for her son and her son did not know the humility to ask for such. Xeno could see the boy as less than a man (not yet 16) and has very little discretion. He would allow him service under him, as a commander if he would bring to Xeno 20 men who would fight for him in a months time. Peter looked disappointed and tried to hide it, and a mother looked worried.

A commotion got loud outside the ship and when Xeno came to look there were men brawling with his own men. They attackers tried to burn the ship but only stopped short by burning the unloaded supplies and goods near it. Xeno rallied the others and pushed them back, Rjugot managed to stop a bolt with his shield as flew to Xeno and Peter was able to cut down and route some men with just his short sword. The docks were not like the ship and Xeno survived by Fate, only losing a few men and manage to take down the ambushers who quickly fled when their first attack was rebuffed.

Impressed with the youth's prowess with the blade, Xeno gave words of encouragement in seeing Peter come with his 20 men. When they examined the bodies, they were under the command of their former master Constantine Umbertopolous (aka Umberto).

Meanwhile Cato has the help of his loving brother in having Bohemmon's entourage settled in. He managed many things, and was a terror to his servants in getting many of the other details done. And when he thought he had time to rest is broken body, Dominic starts calling, seeking him. Taking his mercenaries Velus and Mathew. Dominic had solicitors and he had to rebuild his staff, as many has abandoned him when he mismanagement of his estates.  When Cato arrived he found Xander of Dalassenos filling Dominic's head with garbage and inside the clutches of who ever Xander may really be working for.

Many solicitors but Cato was only interested in the non combatants, after filtering them he found them of use - first was a (Charlatan) healer, as if he never heard of so much none-sense come out of one place, second was a discharged student Jurist (aka Lawyer) who seemed to have been discharged for his relationship for his master, and lastly a Slav who claimes to be a Greek pyromancer. While Cato added these characters to his staff, Dominic was under the impression they worked for him.

Xeno brought word of their former masters betreyal and many agreed they better clear things up with him. Bohemmond being aware of all such affairs, wanted to meet this Frank who worked for Greeks and had his own many questions to ask him. Insisting, Cato had no choice to let his master and Tancred join them.

When they arrived in the estate, it was already dusk and many of the city lamps were lit. The estate looked dark and when the servant was made to approach the door he found it open and a feast laid out, Berthod is first to investigate. They all go in and find the candles burning low (in food preparation it deters flies and other pests), and many of the lamps not lit. They could hear Umberto talking and they called out to him from in the dark house. He replied, a figure framed in shadow. He says its a bad time, and apologizes to them. When they asked why he sent his men to attack them, he was silent and his head seems to drop.

While others talked to the Umberto, Olek, the Pyromancer, began to eat the cold food. He noticed an oil that was hard to tell, because that same smell was usually on him. He found it translucently on the floor, food and many places. He quickly leaves, with an expression of fear. Cato quickly follows him.

When a figure seem to move silently beside Umberto, The figure lit something and Rjugot threw his spear at who ever it was. The figure got run through and droped what blossomed into fire that ran through the house. The structure began to burn quickly, and white intense fire lit the walls and gate. Xeno and Bohemmon grab one of the heavy tables and ran using as cover. Trying to out run the fire's strength as it seemed to be focused on the courtyard. They break through the servants gate into a crowd that has formed try to prevent the fire from spreading with water (to no effect of some of the fire).

The crowd felt dangerous and someone struggled to have a clear shot with his crossbow behind the cover of people. Bohemmon ran for cover, tancred rushed at the crowd parting it. Rjogot was able to quick shoot his arrow at such a short distance. As the figure is struck, many blades appear from the shadows and the crowd panics. We ended the game there.

*(note that prior to the crusade all the titles were very not as nuanced as Duchy, County, Principality. it was their introduction to the byzatnine regional system that created such nuances and the adoption of the high princely title of Duke)
** John Doukas is the current Megas Doux or Supreme Admiral, the Emperor's uncle Constantine Dalassenos (age 50s), and Emperor's younger brother Durongoi of the Fleet Nikepheros Komnenos,

Posted by justin aquino at 12:14 PM No comments:

Email ThisBlogThis!Share to TwitterShare to FacebookShare to Pinterest
Labels: Campaigns

Gaming in the Brain: that should Include Min Maxing myself.

What else was I busy with?

2007 i got married and joined an airsoft team, I know its 2007 because I had Laser Eye surgery at about Dec the same year. So i was 27 with such a metabolism that I could eat 3000-4000 calories without gaining much, after 30 I gained 50lbs (from 130lbs). Now the healthiest I can be without having symptoms of bad nutrition (canker sores, allergies, etc) is 165lbs trying to be within 1,500 calories everyday (how far my metabolism has deteriorated).

Took me 7 years to improve in Airsoft. 7 years from a Mindset that could not apply my gaming to Real life and always wishing I could. Getting hung up with so many things that did not matter in the long run.

Much of my team were all former Gamers who had families and no time to play. I still run games, its just 5am in the morning until my family wakes up and you can see me in the videos juggling that poorly. Then I wake up fairly early for an Airsoft game on the next day. I learned I will need to keep adapting my favorite past time in many forms that allows me to grow and thats changing and hacking a lot of myself.

What I learn in each hobby has to be applicable in everything else I do or else it gets forgotten. If its important a detailed report in my private journal of the entire Thesis of the idea and how I can simplify it to conditioned response or a simple mnemonic.

Now a days I need to simplify my running games and run my GURPS Fate-like lolz. A betrayer to the hard core gurps guys lolz. I think details should just be in the SIM games and not in the table top - because in an airsoft game or sparring match those details are done in less than a second but in table top game it adds minutes (IMO) per turn and in many instances (adding a lot of waste), what happens on the table are activities that GM and Players can wrap up quickly and push the story forward. 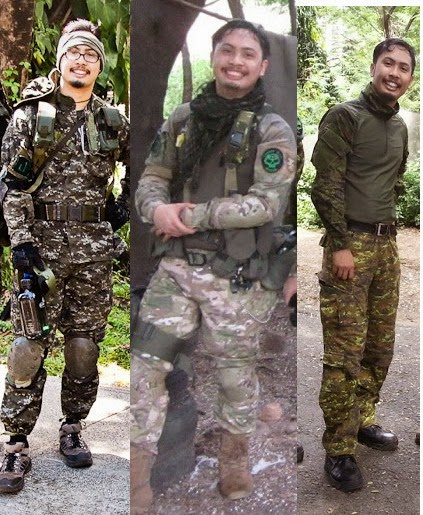 Posted by justin aquino at 10:00 PM No comments: