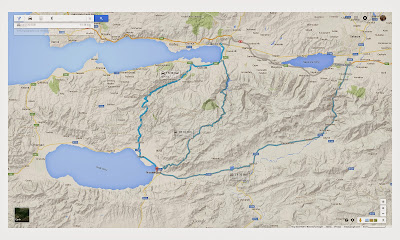 The army separated. they divided between the two paths. This is because of the rising tension between Mauger and Tancred. Olek joined Mauger who took the western path while the rest of the Party Joined Tancred who took the middle path.


There was fear of further raids, Maugers with his Commanders took counsel of Olek. Olek and his theology was taking shape and with his own keen strategic understanding influenced them to act. At first Olek's attempt fumbled, the army wanted to wait but he twisted and weaved his words. Hey preyed on their pride and their strength and got them to be filled with valor. He had them fighting for the honor to ambushing the enemy.

Thiostav fought for the honor of leading the raiding party. A tall and wiry northman with so many arm rings it seemed like armor and tarnished silver teeth, he had the largest and loudest band of Raiders more than 400 men. He contested Sur's honor for leading the raiding party. Sur is the war chief of the veteran and elite corp, every man he has is a warrior and Sur himself is a man who can be mistook for a dwarvish Woden with his crow and blackened eye. He did not take it well, Olek quick witted settled the matter and did it with his guile and manipulation. He let Sur lead, but manage to save Thiostavs face by granting him the vision of killing a great prince of the Huns (note that characters in the setting get all the ethnicity and peoples wrong).

That night their Raiders took to the mountains and marched all night. They did an incredible pace of 7kph, veterans running with light kits and limited supplies. Olek joined and their cordon of spies were able to prepare as scouts passed and reported the vulnerabilities of their faux camp. When 600 horses came through the Raiders closed the road by cutting trees and digging spikes quickly. A shield wall with spikes and logs blocked the path back. Sur let a company ambush the scouting patrol.

When the Turks expended their horses as they raided and wheeled about to draw Maugers forces to charge they were not phased. They let out curses both sides could not understand. Arrows partialy spent and horses strong enough to ride back to the camp for their second of 5 remounts they went back only to find the ambush.

On foot the men of Mauger charged and formed ranks. The band of the Huskalars ran but when fire came, they knelt and brought their shield wall up in a fairly close order. When the riders wheeled about, their ranks opened and huskalars ran and did the same. Every 30 to 50 paces they did this. Opposite of them their barricade had Greek fire and shields to take the archery. Men charged with horses on the edge, hoping to give a glancing charge to deadly error as raiders threw javelins and axes to kill horse and man. Fire prevented them from charging effectively as the Hammer came towards the anvil.

Close enough the Hexers archers stood on shield thrones to fire down at the horses and men so that they would not harm their own. Arrows, Fire, the Night, and frightened animals. Panic ran high and chaos. Archers drew and loosed, then battle cries were called when Greytooths men came through the Shield wall to frighten the horses unable to wheel and charge. By fire light the turks were slaughtered and Mauger saved some for thanks to the gods.

The detached company and took out the scouts and guard, and took the remouts. by that night the Jarl had 3000 horses. Almost two horses per man, and the resources to travel to Nicaea before anyone was wiser.

Tancred was still unable to be amicable with the party. The resentment was strong and the fracturing made the men impetuous. Berthold led a platoon of young nimble scouts with him to recon the position of the enemy. While a master archer, rogue and hunter, he was not a leader and the boys were lost and confused. He used them as bait, and was able to ambush the scouts. With war arrows and the bait he managed to take out two Scouts, only to let two escape.

The other youth ran back, and gave word. The most elite Defensores came forward, while the rest mustered. They managed to meet in time to defend the wounded scouts who were attacked by a band of Turks. It would have been an easy match but the discipline of Tertions Night fighters kept their discipline and their backs to the mountain side. Turkish arrows bristled their shields, the grain of the 25lbs Scoutai split with the leather backing keeping it barely together. The Turks wheeled and fired, looping to try to shoot over the edge. To deter their bravo Berthold heaved and loosed his great war arrows while Tertion carefully coordinated his Skoutatoi.

Meanwhile Rjugot lead the band of Scouts to flank around to their east. While Konrad raced to come to their aid with the skirmishing force straight ahead. When his hunting arrows flew to harrass the Turks 10 men were down, a quarter of the force Tertion had with him. 6 kilometers was a painful and ragged 30 mins for the light infantry while Rjugot had the terrible task of looping around to surpass the same distance with Xenophon. When Xenophon arrayed his Battalion to close off the Turks they were spent.

Berthold hurled 3lbs of great war arrows in the dust cloud of men and horses. He struck horse and man. The battle went no where fast and remounts were needed for another fresh round of fire. When they turned away from the feeble attempts of hunting arrows and clumsy javelins an array of 30 men abreast 2 ranks deep came to stop them. Xenos men were struggling to bolster the shield wall when arrows flew overhead and pierced 10lb shields. The third rank barely formed when glancing charges smashed through and collapsed the first rank - Xeno's toughest men.

Spears were lunched but Arrows replied, gaps opened, and Xenophon cried out for it to be filled. Boys and men began to fill the gaps. The arrows shooting overhead prevented them from fleeing and came to find shelter in the ranks of the shield wall now thickening to three and almost four. Konrad arrayed the raiders from the slopping forest mountains and continued harrass them. While hunting arrows were not enough to kill, it was enough to harm horses and no one wanted to have to run on foot if the worse came.

The pressure increased and now glancing charges smashed against the human wall. A horse jumped over and came to crush the two ranks infront of Xeno. The rider slashing with a heavy saber down  at men panicked and shocked. Xeno cried out loud to rally killed the hansom animal and his terrible riders leg was smashed beneath it. They moved forward but then an ambigious sign came. Sounds of french echoing the mountain sloped walls and thundering heavy iron hooves. The earth shuddered more under the hooves of half ton horses.

Tertion was swearing as Tancred's men clipped passed them knocking one of his men. The knights saw blood and glory and headed straight for it. They smashed everything else getting to it, and the panick made Xeno's job harder as he tried to Pivot his wall. On command they moved and the farthest man was smashed out of the way by fear fueled horses. And more than a third of his wall collapsed, and so did the ranks behind them as heavy saber came down young, confused, and spent men.

It was not aid that came but the thunderstorm of knights that echoed blows onto the mountain walls. Xeno lost good men and Tancred took glory at the expense of the garbage that walked. When the fighting died down Cato near collapsed dealing with all the repurcussions of the events that transpired. The rift among them deepened as word spread that the party were ungrateful of aid when their foolhardy attempt for glory (with the intent to exclude Tancred) came on their heads and their Norman lord saved them.

Cato was bed ridden and not much progress was made that day.

After long meditation and counsel Xenophon discovered who betrayed the Emperor and let Smyrna be captured and him and his men enslaved: The man who's son he has rescued from the Emperor and has promised to come back with "evidence" of the culprit.

Garbas needed the navy occupied in the Agean so that he can be left to his own devices.
Posted by justin aquino at 6:51 PM