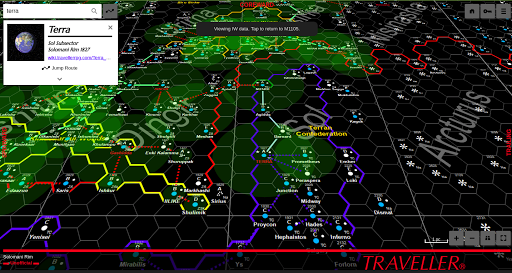 ike Delta-V where freelance Astronauts of various specializations are getting hired and trained for pioneer missions to catch asteroids, comets, and material to bring some of it or all of it back to CisLunar Space. The race to reduce the cost per kg to Cislunar space is the Race to have as much Sensors and navigation equipment to better find Opportunities and Catch material.

the Normalization of Material Capture and the Growth of the CisLunar. CisLunar Space and Earths population pushing outward. The Push for Jupiter and Psyche 16. Jupiter with its moons, rings, and low Delta-V cost resources would become its own HUB and development. Experimental Micro Jump Drives discover the Vilani Outposts. Imagine the logistical fleets that were set up to allow megatons of material to Micro Jump all the way to Vilani Outposts

Commercial Micro Jump Drives. From Jumping from CisLunar Space to Jupiter and then Jupiter to Saturn. Torch Drive Efficiency still has not reached levels dreamed of in the Expanse, but have become much safer. Ion Drive Efficiencies have become very viable to start having hardened Habitat enclosures.

The later century is marked with the events in Interstellar Wars and the Vilani. Sol micro jump capable fleets against Vilani Jump Fleet with vastly greater Torch and Ion Drive efficiencies. The Crushing Defeat has so many facets and angles.

Demographics have changed drastically as humans live to 200 with major strides in Cybernetics and prosthetics. What makes human survive in space is the same science that makes him live 200 years. The economics of population that can work or a hundred years and the number of families they can sire is quite remarkable.

Posted by justinaquino at 10:29 PM