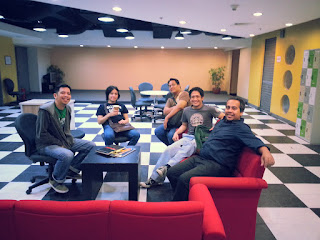 So this is Gamer Meet-up 2.
We have Tobie, Clifton, Uril, BJ and Carl. Fred joined us after this pic was taken.
we got to talking about what happened while I left AEGIS and did some growing up. There was a lot of insights, but most notable was that there really is a serious decline in RPers. All the other hobbies grew: board gamers and wargamers, but RPGs were on the decline.

Open Game Meet which was open to all games, had no more RPers and Wargamers and became On Board. Learning this was quite shocking for me, and it took a while for some realizations to kick in.

Is it really a hobby that has no market in the philippines?
I know I'm one of the last GURPS players here, but could it be that the gaming groups insularity has caused such a sharp decline of players?

Back in the Day, AEGIS did track the groups and helped people find groups in their new areas. Now that AEGIS has gone inert and the gaming groups have lost their ties, I wonder

Lessons:
Giving Back to the Community: We game openly and help people get into the hobby, so that the hobby will still be alive even when we stop playing. There are some personal and sentimental reasons why this matters, and the thought that my son may not find other RPgamers growing up (except in the US) is actually quite depressing for me. To think that the time we spend introducing and finding new gamers actually means the survival of the hobby beyond our own gaming group. More imporantly we learn to be

Building Bridges: Its the insularity of groups that another lesson of how to self destruct the hobby. Petty differences and the politics of the past made groups smaller and more prone to the pressures of life to leave the hobby. A more interconnected and accepting web of relationships would have allowed people to freely move around and have more choice in groups.

The Philippines can probably be a case study of the dying of the hobby, despite economic progress. What I find sad is that, could that mean we do not have the traits to support the hobby.

Demographics of a Gamer
A friend who is a Recruitment and Training manager of a 2000 seat BPO was very pessimistic I would find gamers in the BPO industry of the Philippines. He said creativity and imagination was not part of the traits of what the job market was looking for. I was proposing I use the location I have and the gamer networks there are existing to grow the hobby, hopefully targeting gamers who work here in eastwood which has a density of 30,000 seats.  Since the population "should" meet all the language and  educationaly requirements for being a gamer, it appears background is something statistics won't side with us.

We really need to create a new group of gamers. It may be from the ground up. Attracting nerds, geeks, and people who want a different kind of social group other than those found in the more exciting night life of a BPO economic zone (a lot of bars, restaurants, excuses to socially meet up). why would someone with all such want to hang out with gamers?

A marketing puzzle; one that I have to use my own unpracticed Multi-media arts degree to solve. Thankfully, I have the help from the group that is slowly growing to be the new hobby growing group.

I have to reconnect with my seniors, former AEGIS, and my mentors. I guess all the XP and skills i got in work, are available to help solve this problem.