Its going to take a lot of work to reference and fill this up. I want the Traits to be something that would be easy to Write on an Index Card. The Trait can be summed up very well in hand written in 160 characters.

My Default Setting will be the 11C 1st Crusade Period. Which is one of the Starting Challenge in Crusader Kings 2 called the Komnenian Restoration and the Campaign I wish to continue in the next life (lolz), which is also the era of William the Conqueror, The Reconquista, The Rise of Robert Guiscard, and Various other important Campaigns in Crusader Kings.

You will notice the Following: 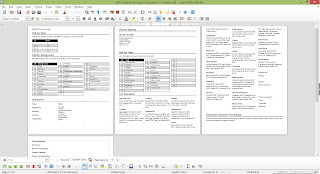 Can you Believe this sparse document took about 15 hours, and I've gone through 3-6 different versions of this (depending how far back you measure the versions)? I feel like an idiot when ever I do stuff like this because it looks so simple but I have design princples I need to adhere too, while allowing for the Complexity of my own Historically bend tastes.


How much work there is left to Go?


I'm just thinking if I had these tools in 2006. Ran with much smaller scopes and managed expectations lolz. I would have had more games and more people who would not be intimidated by the 500pages of RPG book I hulked around lolz.