Test Characters, How I made my Load Out gsheet, and World Building fun.

Creating the Test Characters made me realize the following.

Other things to Do. 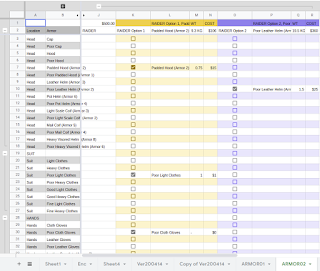 Welfare Elves. In this improvised Setting, elves that are in the outskirts are given basic essentials from the Cities. With magic being practical - it is easier to create a ton of food and basics than cast a fireball, as well as more rewarding these elves are given basics and made to live closer to the other races. An elven village of 100 households can produce 1000x that of a human village (the productivity of what used to be 90% of the population is now only less than 2% and still producing more food than the Entire Population can consume).

What makes Elves interesting for me is the concept of hundreds of year lifespan with a Human Brain. Been getting into Science of Mindfulness thanks to the Late Ronald Siegel's Great Courses lecture and the Neuroscience he discusses teaches me about how memory work, as well since I'm a daily Anki User every day I have first-hand experience of memory degeneration measured.

What if you had lifetimes you've forgotten? So in Expanse (Sci Fi Setting) and various iterations of Basic Welfare its been widely accepted it is not enough to have basic. Maslows hierarchy of needs and how time can pass if everything is the same (how attention works Covered in the Science of Mindfulness) can basically create a Situation of Elves being "Forgotten" and forgetting everything.

Current events remind me of the need to connect to people and care and perform actions to care for others so that community and empathy is reinforced but it seems its we run into Diminishing Returns and Scarcity to do the charitable and compassionate thing. If I had an elven lifespan I will never find the time. To find the time is to take a risk.

It is also an Allegory of developed world surplus viewed by poorer countries and their misunderstanding of being provided the basic necessities. The idea is not to just provide but to give people the resource to be able to be made to care about others. Providing only so that "these people won't bother me anymore" is what most think of why provide basic.

if there were no OGL I could not share this. I wish I can do this for Dungeon Fantasy but its not shareable. but with OGL I can share this. Basically, I'm making a Combat only OGL, in the theme of TFT. Constructively channeling my hangups and just having fun.

Posted by justinaquino at 9:00 PM