I watched about 4 Google Tasks Videos and they never explained they can open and VIEW DOCS or SHEETS INSIDE of Gmail along all the TASKS. 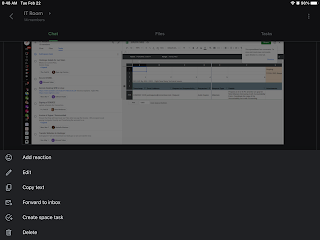 So Nicco and I were having problems organizing the to do list. So I decided to hit two birds in one stone and to test my limits to LEARN A NEW software add on. I asked my self "Am I still curious or too set in my ways?" even if I encounter problems it would still be ok. Also my IT staff needed better instructions so I needed to level up our organization.

1) So you can Open Docs and Sheet in Gmail and you can view and edit the doc/sheet while in gmail.

Go to Gmail and go to your SPACES an choose a file you set up or shared in this space. It will open.

2) We discovered SPACES has a weird bug no one talks about:

I can add Nicco or Nicco can add myself BUT 50:50 chance we will not be automatically added to a space.

If we are added thats BAD, I can just add someone without their PERMISSION. which is weird and dangerous. So basically I can add other people and a 50:50 chance they will be added without their permission. We noticed that when you CREATE a space it will send a JOIN option in the email but if you add people after creation they will be 50:50 automatic join. You can remove and add them back to create more email alerts if they missed it.

BUT if we cant... we didnt know we can go to our Email Updates and look for the Invite to Join.

We had that evening just troubleshooting and deciding on the workflow. He was using his personal gmail and I was using my Game in the Brain google workspace - i bought it in 2015 hoping one day I will start a gaming company lolz.

a) some tasks disappeared. I had about 3 other tasks that just disappeared as soon as I closed the window. What is worse is I cannot copy the tasks to the GDOC to easily copy it back. What would be good is that I can keep it on both and there is Traceability. I hate this kind of issue: it feels like "gaslighting" or "false memories".  Tasks are not governed by the same version controls as Gdocs and Gsheet and the other apps.

b) I cannot SUBTASK or CHILD tasks unlike regular Google Tasks, for PERSONAL.  This would organize things better. Its harder to see Critical Path and Chain without dependency trees.

c) Trade-offs. Not much of a CON reall, its just the reality of the design. I cannot access comments but I have access to Tasks.

4) Why use Tasks: Pros and Features.

a) Tasks are beside the OBJECT OF DISCUSSION. if the object of discussion is a document. We havent tried Google Draw or Slides but that would be next.

b) Tasks appear on calendars with schedules/deadlines.  so it appears in my notifications. Nicco and I agreed just to check it off when done and we will review done tasks. In our mon and thurs meetings.

The world building spreadsheet (which requires javascript for dice and to populate ranges of data) which is also Critical to the Experience will not make the March 31 deadline based on what I started seeing now that I started calendaring the deliverables. It would be April 30 with the spreadsheet. I'll have to add that to the budget.

b)   Definitions. When we say planet we actually refer to something that is not a star that can be 80 jupiter masses to an Asteroid which can be arbitrary in size - there is no technical limitation what is an asteroid or a meteor... definition in Mneme world gen defines it so that you can say how many Asteroids, Planetoids, Minor Planets etc... is detected or being talked about. These Technical Terms Gives the Players and Referees more tools to describe the solar system and what is encountered. So it would be weird when Players Jump into a NEW solar system only to discover late in the game a Brown Dwarf 60 Jupiter masses  10AU existed all along. something they could not detect would be something like Planet 9 which is 200-300 AU.

c) How solar Systems are develop. this will help understand why the mechanics work the way they do and what is Unusual or a process of the immense scale of time of a solar system (Billions of Years).

d) MAIN WORLD building mechanics. human centric - this is what the main world would be given a human-like inhabitant.

e) Stellar Creation. what sun are we talking about if thats not already a given. this determines the ZONES of the solar system. Zones are a mix of the gravitational pull of the sun against its solar radiation pushing outwards and the centrifugal forces of orbit.

f) INHABITANTS building mechanics. a Fractal system that allows for creation of Inhabitants.  this system applies solar system wide and can be applied to smaller and smaller chunks of the inhabitants for detailing.

g) PLANETARY SYSTEMS. Creation of other WORLDS and Disks (like Kuiper belt and asteroid belt) to populate the solar system. with the disclaimer this is what can be detected at different star system and at upon arriving.

h) Special Features. the Economic and Strategic value or non-value of the solar system and what elements should be and the vacuum that will need to be filled if its not in equilibrium.

i) Hex Map of Orbits. for campaigns or adventures that need moving Orbits. We will provide one of SOL and to follow based on our sale goals.

j) Blender Tools to generate Worlds and 2d Terrain Maps. these tools will let the player quickly generate maps with blender so that the world is not stuck merely on a procedure but after buying this and setting it up start churning out worlds.

k) World  Building Spreadsheet. The idea is buy this book and access the google spreadsheet so they can start producing the worlds and systems THEN judge the mechanics after as well as its usefulness. its easier to start clicking generate than reading the book and learning the system and seeing if the product is worth while.

Sales Goals for other Products. What we produced is the minimum viable product we hope people will like given our limitations and strengths. there are things we wish we can do for it, but we have to be reasonable on the amount we will sell. the Mneme Combat system only sold 30 copies which I am very grateful for. Given the cost of the product we hope X number of sales to commission more materials and details.

I dont mind the loss and even hope for a break even. I just feel privileged and lucky I can participate in a life long dream (to make games).

Posted by justinaquino at 9:41 AM