This is how the World Generator looked based on "Learn Google Spreadsheets" Tutorials by John Karol. John had other matters to attend to so I enlisted the IT Ojts as a recommendation by the ReactJS developer.   This was around April ( a month or so earlier).

We tried first to simply have a Function then Index Match the Results. Feeling our way around. 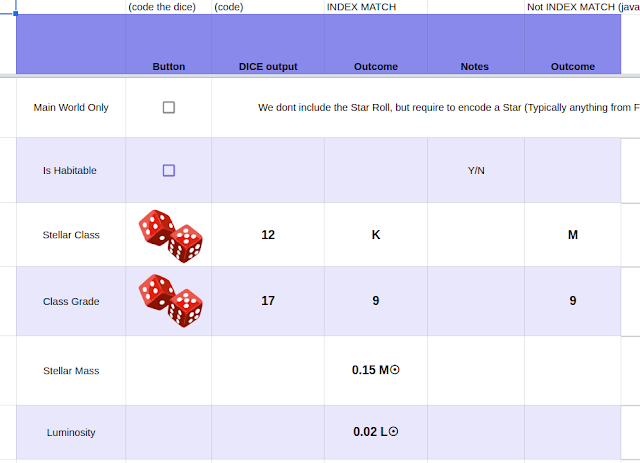 Then I realized to Color CODE what is a ROLL and what is a REFERENCE (index match).

The OJTS made it much nicer.

A lot of Corners were cut because we were all learning Javascript and was supplemented by my knowledge of Google Sheets. Last time the OJTs had Javascript use was 1st year college, 3+ years ago.
I just want this out there to hopefully fuel the inspiration that - Hey our solar system is Freaking Awesome and Adventure worthy and even the many smaller K-M class Stars nearby and Brown dwarfs are probably as well. By the Time we can travel in Light years of our star the level of Technology and Materiality will bend our concepts of economics.

In Hindsight - I can do Project Management for Book + Software and Games, after work. Its just that the INCH pace of it leaves me looking for another source of Wins and Validation. I was able to get published last year, and hopefully this year with a more complex product.

My skill set in organization and problem solving - as a Project Manager - is pretty much realized as now I have software project on top of projects like Migration, Construction, and Implementation.

As I learn more about the new wave of RPGs, I realize the niche of simulation/case study may get smaller or bigger. Both want Simpler RPGs, less crunchy are somethings all want.

As for RPGs that try to structure Hard Scifi in an OPEN manner that can be easily updated so that we GAMIFY many new Science Concepts for accessibility like DeltaV budget, Orbital Mechanics, Economic and Demographic Data etc... that is going to be definitely be RARE, but as Games become more accessible - as the PIE gets bigger the tiny slice is going to be a bit bigger.

if 0.0001% of gamers are hankering for a way to SLOWLY ease themselves to harder and harder scifi as they realize "Wouldnt it be cool if I understood how this work?" "Wouldnt it be Cool? That the scifi caught up to what we NOW KNOW"

you can measure them by the people who bought the similar DriveThru RPG books and those who admit that "I'm not really smart but I want to learn." I'm not the smartest of my class or the nerdiest but I like it and I don't know where I'm allowed to be regular intelligence and understand this.

The days where my friends could read 600+ words per minute and I had a dismal 100 words per minute. That they finished novels every week and I struggled for 1 month with one novel. I liked it - but I had a hard time reading. That people would be in forums lording their understanding over others and turning off (tens of ) THOUSANDS if not more people to Scifi and Historical games. One of these thousands of people don't mind the trolling or too naive to notice got to learn and like the harder scifi.

its the super clueless and naive people who like it despite the people who ruin it for all 😅.

While misinformation and degeneration is so powerful that it can subvert nations and democracy - it is interesting when people can still science this shit out and come to conclusions despite dis-mis-information.
Definitely like Micro-plastics, radiation, viruses - misinformation and the crippling of science education will rewrite our entire idea of the future  - that it will be filled with the forces we underestimated that scar the civilization - creating so many wounds that will take forever to heal and limit its progress. Even with crash courses lowering the barrier for education and so many other Social Progress efforts and remarkable movements come in to play - us being human - being fragile and easily misinformed - primed and manipulated by powerful well funded forces - will create a future where gaming with this will be a die roll where critical failure exists. that in the spectrum of possibility the hobby can be untenable - despite the WIN-WIN of the hobby.
Posted by justin aquino at 10:35 AM