I think you can click to enlarge. This Layout is from my "ranging" in the most crowded areas in Divisoria. A little background: divisoria is where you get the best deals for knock-offs, direct-from-suppliers and hard to find goods and not a place tourists should go to without an experienced guide. I stick out like a sore thumb even as a local, especially since my first language is not filipino. 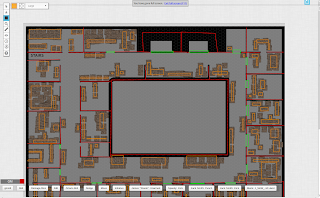 As you can see there are a ton of crates, crates are tricky because they can hide areas and can be red herrings. Players can basically waste time trying to check out a what is behind each create. Its common for interesting stuff to be behind these creates a bunch of baddies shooting or monsters can make the decision making processes easier.
By the time I've posted this the map has been already used up. I'm drawing mostly my experience with bldgs for map making and how in 3rd world countries many buildings don't exactly follow the building code.

If your interested to talk, call me up in Hangouts and we can have a chat about modern map making. I can set up GIMP and we can go step by step in making something like this.

You can see I stopped drawing doors, if its an open passage way and LoS is blocked then its a door. It saves on space. You can also see how Modern Places can be as maze like as a dungeon and very dangerous. It was so easy to get lost in Divisoria especially since I can just pull out my phone without risking it getting snatched (good thing my brother came with me and we were able to watch each others backs).

The yellow blocks are easier to make than lines, because lines require precision and the blocks don't. In the end stacking a bunch of yellow blocks is easier than carving out a layout.

The interior hollow is supposed have windows but I'll just narrate it, allowing visibility is too time consuming compared to the GM just describing it.  I wish Roll20 had a way to copy a Done Map so that I can make variations of floors.

I will have a "walled" City encounter (based on the Kowloon Walled City and movies like the Raid or Dredd where its urban warfare. Such maps will fall under a template which I flip and move around the parts. I'll post it when its done. I get to play out my Airsoft frustration when making such a map lolz. 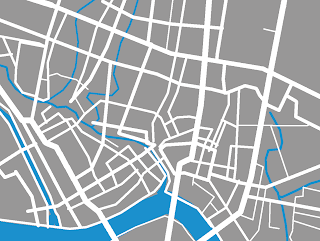 This map is a Tracing of Old Manila and there was no City Planning. The roads are still wide enough for 4 lanes for carts but 2 lanes for cars. I plan to have running battles in these maps, mostly narrating whats happening instead of second by second combat. Its easier if the players trust me or work towards tinkering the rules to fit this kind of encounter. I've been here and did a lot of walking around and research because of the Military Gear shop that I frequent that is over here.

For another game, I just flipped the map to represent another terrain. Corners and directions are what matter. A to B and going through this whole mess in the terrible traffic and overcrowded city makes for a scary and action packed encounter.