Your Own Hell , Ravenloft your Setting.

Looking at my old Ravenloft books and how much I've learned about history over the years, my definition of Tragedy has changed. Especially since I've become more humanist in my views.

I've read some of the old Ravenloft novels. There is a sharp difference when you compare historical fiction and the non-fiction tragedies to these novels. Particularly different is the market, and the work that goes into making them.

Looking into my old Domains of Dread, it is quite interesting to read up on all the misery injected into it and comparing them to how bad it really was in history.

It is quite sad that there are 2 domain lords based on the Vlad the Impaler (Vlad Drakov, Strahd_von_Zarovich... I know there is one more but I forgot). Then there is drawn from analogs of literature: Frankenstein and Jeckle and Hyde. This, after some time, gets old and I begin to wonder... is there any other sources of tragedy in history these writers could have drawn from?

Villains inspired by really scary sh*t in history and turn them into Ravenloft Analogs:

Justinian I- The Anecdota, Justinian's Plague, the Massacre at the Hippodrome, His personal Inquisition, Tribonian's debauchery etc. etc... As a villain, with an empire descending to glories of the past, draws a poignant picture of melancholy in the middle of swirling chaos.

A Ravenloft Analog of Justinian would already incorporate a huge cast: Belisarius - the Paladin General, Antonina - his promiscious seductress and manipulative wife (who is rumored to have carrried an affair with their adopted son), Emperess Theodora - the master manipulator and spy master and true equal of the Emperor Justinian, Tribonian, Procopious, Narses - The Eunuch General (you can make him a wizard general since he was a bureaucrat turned general).

Qin Shi Huang - a Death Obsessed emperor who is both ruthless, a genius, masterful tactician and manipulator. I don't know much about him, but already the way many historians portray him and his quest for immortality is quite legendary and tragic. The creation of his tomb and his terra cota army should be inspiration enough

Queen Isabella - Imagine Queen Elisabeth ruling a Theocracy and having a powerful fanatic army and legal arm (the Spanish Inquisition). A woman ruling a Man's World, and not just any man's world, the Patriarchal Church and their rabid dogs.

Some added touches: Spain's then oppressive and unchecked Aristocracy (compared to the more egalitarian European equivalents). Throw in conquered peoples from their colonies (which is a different era but adds more flavor). Don't forget the more Archaic and Overly Idealized and Uncompromising honor system. If they had a look, they would be using more "ancestral" and older equipment of exceptional quality but a generation or two out of date.

The Crusader Barons - Godfrey, Bohemond, Raymond, Robert, Bishop Adhemar and the rest of the Crew. You can easily trim down this cast or keep it as but just use each Baron as you see fit. The tragedy of the Crusades and how it contributed to the rest of the world, creating the precedent for Global Holy War, is fairly easy to fit into a riveting and complicated story line.

A Ravenloft Analog of the Crusades doesn't need much "gloom" dressing. It was actually contentious stories of tragedies. Check secular historical sources and comparing it from the historical perspective of both sides. 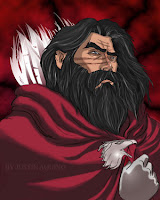 Ivan the Terrible. Now this guy is tragic. Killing his own son, actually working against the social inequities with a secret police, while being viewed by most as a Tyrant. Stragely, I'm surprised Vlad Dracov was recycling Vlad Tepes instead of Ivan the Terrible.

the Failed Father figure of Ivan the terrible is something I find interesting. What would be cool is incorporating the Story Line of Saul (the Bible) from the TV series Kings into this kind of Story Line. Especially if you can inspire your Players by imagining Ian McShane as Ivan the Terrible and all the other cast in that show as the other characters of the tragedy transported back to a medieval setting.
Posted by justin aquino at 7:25 PM