Scope Creep - why did I add more Scope?
because my Assumptions were violated - that I thought I can play a TL8 game with CESRD and nope I cant. This added about 40+ hours to my predicted work even if I've about had 40+ hours in it already (writing after work and family time).

Notes:
This is the Sample Sheets. I noticed that ships need to be analyzed SIDE-BY-SIDE in order to understand the system mechanics the game Designer sets out.
So you can see here that the Olders ship takes more work to keep Running, but the Newer ship only needs half the crew. But the older Ship, took a SMALLER loan and has a lower Mortgage. heck PCs can start out easily FULLY OWNING the ship quite easily.
I've simplified the maintenance and penalties of a problematic ship. 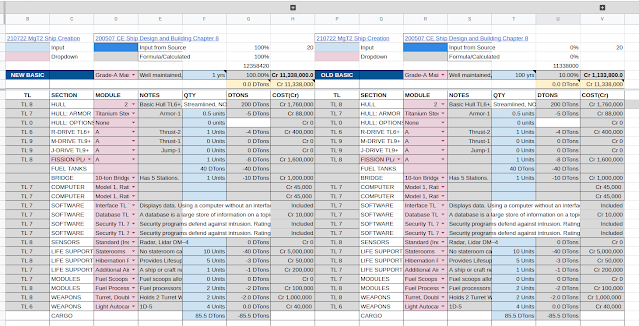 What to look Forward To.
Posted by justinaquino at 12:33 AM