They made my 8 year old Black Crane an NPC; it was awesome!

My brothers group made my old character of mine is a featured NPC. I have to give props to Socksquad for his brilliant use of him in the story. The story is in the thread here. His character story is here.

Note that Samurai Code of Honor aka Bushido and the Celestial order is alien to our modern virtues. The character I made, back in the day, was a character who discovered humanism, the same way anyone can discover a scientific fact. Heavily inspired by Rurouni Kenshin, it is a story of an abused and dangerously curious youth, who learned the hard way where his "code" failed to make sense and destroyed the lives of loved ones and his own.


This was in 2005, but now given 2013 it is quite refreshing to know my Cannibal Crane is considered by my brother and some as the most memorable character. My brother joined my other brothers group after choose to stay in the Philippines and only met my character in play. I've never mentioned this to him, and had a great time discovering the character I have left behind do a lot of amazing things in the story. Socksquad employed my Logistics knack on the character and built over him a very nice story that I would have never thought of myself.

In fact, he was the only who figured it my character as one of the personalities they met earlier in the adventure. This allowed him to figure out the Black Crane's motivation.

One of the players wants to make the character a villain, after there was a moment where there was a very strong contrast in virtues and behavior. One being a lazy ass crane, who was beyond help and incompetent and clueless; the other a humanitarian in a medieval age that is only looking out for the Eta and the down trodden.

I should make a GURPS version of him. 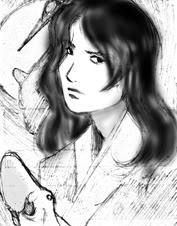 "What is a samurai's oath worth to the innocent?"

Posted by justin aquino at 8:02 PM