In Cepheus Engine Ship Creation the following Are Tables that Should be converted to Simple formulas.
Simple Averages can be used to Calculate how the tables work out.

Javascript/Google App script is needed for the Drop Downs.  That took about 2 nights. And even after figuring it out I had a lot to think about - like how to order the information.
You will notice 3 Qty. The first quantity is a reference quantity typically Number of UNITS or the Dtons of the ship. 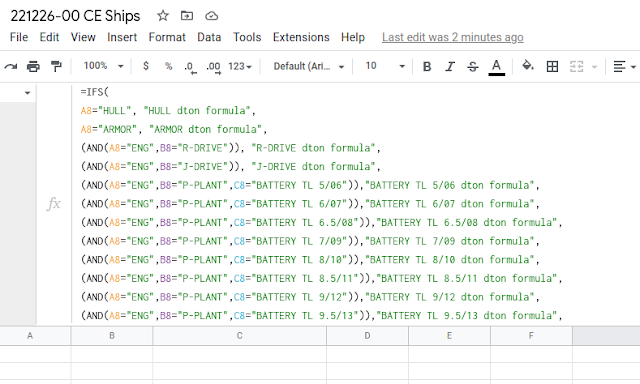 I had to watch "Learn Google Spreedsheet" to review IFS (many ifs) and OR() and AND() functions. Then I had to google how to create NESTED quotes. so I need to add a certain number of quotes that I don't full understand even if I made it work. Trial and Error - using the feedback of it working. I think we get overloaded and we cant understand it anymore and rely purely on the black box - not knowing how it works but knowing If I do X then Y is the outcome.

So I need to make these all manageable. Like instead of EVERY battery and TL power Plant looks an Index Match.
This is my first try - I later realized I should use an Index Match for this. That is another mental ORDERING of how this will all lookalike. 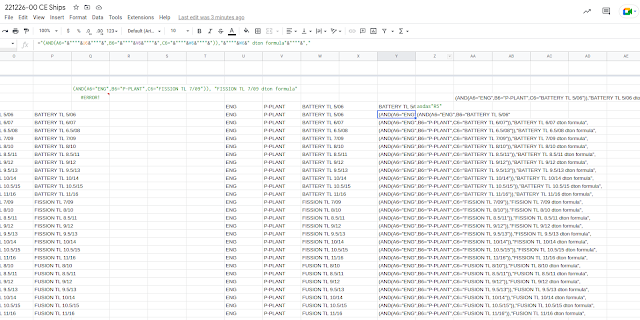 Creating a Table for this is hard. 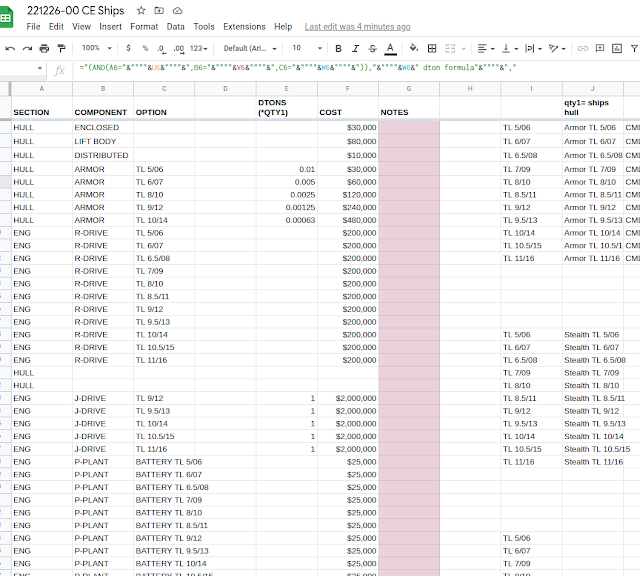 Next I have to have a Column that Simplifies all the text.
I'm still studying the Orbital period. I learned  Mu or mu (µ) and its gravitational constant and mass. My problem is that there is a lot of PREREQUISITE knowledge when mike aben is talking - like having to remember everything in the previous Videos in his kerbal.
I will have to have to use a WORKAROUND - particularly Circumference and ΔV - that the ship is orbiting at the Speed of its ΔV and it takes X hours per orbit.
in ΔV every Position is an ORBIT.
A % of Orbit Time (possible to have more than 100% orbit) = Orbital Period per leg of the trip.
so I add up all the Orbital periods until I'm at my destination.
https://deltavmap.github.io/?system=Solar&origin=LEO&destination=LMarsO

so ifts 4 months to get to Mars at 6kms. Spending 24kms would be probably 1 month.
You know what's MIND BLOWING about this NON-linear method of travel -
1) I'm effectively JUMPING between CURVED space times per gravity well/spheres of influence. I'm Accelerating to get out of one, and Decelerating to orbit one until its time for me to get off.
2) Abstracting is not impossible with someone who just knows algebra and doesn't do heavy math for work like me. Its all about Extremes and Averages. Since I sum ALL the orbital periods of each leg of the journey  I just have to make sure the CRITICAL CHAIN and PATH have the largest weight and base of a % of that. Basically it means If I want to get to MARS from EARTH - I have to factor the Orbital periods and base a % out of that.
Now Once I have the % of Period or TIME then I can chose to BURN more extra Delta V to reduce that time. If I burn x2 as much delta V I can assume I'm halfiing the time.

Pecier is going to teach me and Nicco about Hohmann transfers - which means teaching us to calculate orbital periods.

I realize the amount of Delta V of fuel in TL9/12 (Cepheus engine 9 and Mneme 12) is so efficient its possible to send a probe to go reall
Posted by justinaquino at 11:39 PM