Castle Falkenstien after so many years 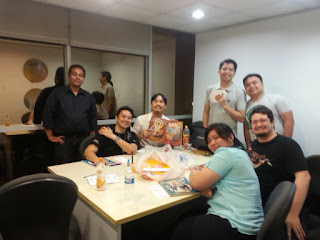 Castle Falkenstein was one of the first games I learned when I first met AEGIS. I was in an Opus Dei private school in my second year of High School when I was invited by Enrque Syquia who was a Teacher at the time. This is when I first met the legendary local grognards and saw RPing outside that of my friends, brothers, and myself.

At 16-17 and awkward (1996-1997), I still remember most of what happened. There were GIRLS LoL! (not knowing the gender till only college) and other students my age (they were from the international school) and our Greenminds Clicked! To bad I didn't know how to make good connections and keep in-touch, or else I would have had a larger gaming network and won't be so game deprived.

I first witnesses accents and character impersonation role-playing there, because as awkward teens we would describe and narrate in the Third Person instead of personalize the response with "I"s and "I will".

Growing Older and aware of Fudge, Fate, narrative based mechanics I find the system so advance at the time I've come to appreciate and learned to tweak the game system to compensate for the faults. The game is easy prep, and using a Fate based mechanic where I don't anymore resolve a task if they meet the prerequisite ability instead focus on narrative control (Yes And/Yes But) the system would be easier to grasp for other learning strategies.

I didn't understand it back when I was HS, but 17 years later I really now understand it. I used to play this in GURPS or run it like a DnD Game, but I get it more now.

Tobie's GM skills are amazing, his improv and story telling is one of the best. His mastery of theater and writing side really shows in how effectively he can spin the story in a clean and unexpected direction. How cleanly he does it and foreshadow it, is what I find hard if not very hard since everyone had to relearn and learn the system and he had to push us to be more initiative-based. I admit I would have been lost playing to my character's personality if he did not make the effort to put the situation that clicked strongly to the motives. 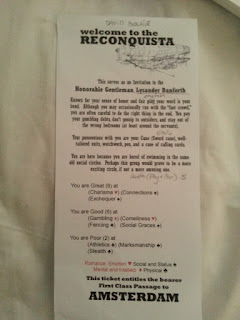 Offering Castle Falkenstein in the bunch of games I can potentially run. Will need a two week heads up.
Posted by justin aquino at 11:54 AM