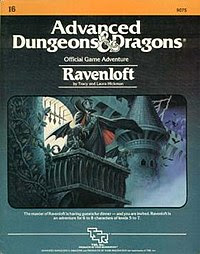 Since I'm running a Kitchensink setting, I realized I can just mine old adventures for ideas and put them under the skin of the modern fantasy I'm currently running.

I actually had the original module BUT i never had the time to play it. So I ended up giving it away.

I remember researching/preparing for it. Instead of the old vampires I like this new generation of Vampires, since I got to read Anne Rice in highschool. too bad I never got to play Vampire, despite having the book. (like many gamers we have the books but we don't have the time).

So what if this was spun in a modern fantasy, but maybe passing the Bechdel test lolz instead of the damsel in distress or maybe more modern and humanistic themes.

So basically I can make a Ravenloft (or any adventure) in the Metropolis of Haven, where the BBEG is a Vampire. So now I have to think in 2-3 bound more than my players, trying to push some Imagination muscles how I'm going to avoid all those Gamer-predictable pitfalls lolz. Sigh

Anyway, I've realized I've barely touched the potential of a Kitchen-sink setting to explore ALL the old tropes and all the old adventures, but running them for my players in modern skin and with more updated modern problem solving and ethical dilemmas (players are free to completely ignore these unless they got it in their disads lolz).

I guess what would be removed is Dungeon Crawling and more of the 3rd gen RPGs "Scenes" where the GM just have to cite some key words for a given scene. Although i can provide some prep for Spatial Combat with roll20.