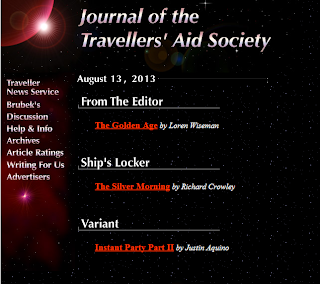 Self interest being transparent here.
The first post, Instant Party I, had 4 characters in it. This had 5, 3 being AI companions. I realized I failed to consider the AIs (Volitional AIs so they can be played as PCs or extra characters if the party splits up in an adventure, if that is a GMing style option available). Of the 9 characters I wrote I think I made about 5 AI companions, there could be 2 more but they are notes in the story and not detailed.

I really owe the wordiness to the details and getting all the skills, next is equipment (the augmentations) and templates. Especially AI's, they have to be "Complete" and very little room for lack of forethought or preparation (where the few extra points kick in).

I actually wrote 10, an experimental ATV Robot Tank designed for Artillery and Counter-Armor role but I'm in Ballistic Spreadsheet Limbo since stats in UT and Traveller weapons are not "jiving" well and would require a Complete OVERHAUL if not very strategic Tweaks which is time consuming since I'm trying to study blender right now.

Problems listed
anyway it will be a while before I cook up answers for these.
Posted by justin aquino at 11:47 AM