Universe Sandbox Gifs and Playing around.

Game Running Logistics: So Universe Sandbox Records Gifs with its built-in video recorder. I have simple rockets and still trying to figure it out, after work I'm so exhausted with meetings and problems the numbers all look alien and incomprehensible.

So I can probably record gifs of the scenario and location perspectives.

Still desktop recording with Kazaam (Linux) seems to be better so I can give notes but won't be immediately playable in in Social media group for the game.

1) I can select objects and it will relative distances. Ctrl+Click to select multiple objects. Then bring up the menu of either and it will give these options.

2) that as I add more mass to the orbits of something (Like adding more Giga or Terra TON space stations) the ORBITS starts to change. So early TL9.2 or TL9.3 CIS Lunar Space economy "rounding" or "herding" a bunch of the trailing asteroids to earth orbit for a low delta V source of material will need to look for places to "Park it" 1-5E+13 kg (gigatons) .

Am I capable of writing an adventure set in 2070 of using an early "repositioning" project to place a 1-5E+13 kg asteroid in cis-lunar orbit and Can I make it interesting enough to play ("Lowest Bidder" problems, Politics and Intrigue, Hidden Incompetence and Competence - Drawing from Work Experience with Gov't bid projects in a Developing Country, - common sense engineering may not exist in a Committee )? Small 500-5000m sized ones. The earliest MINING vessels are earliest Nuclear Salt Water thrusters - using water rich asteroids to fuel its own motion. (no need to carry fuel if the fuel is there). When INERTIA tethers arise able to launch megaton mining vessels with fuel mostly intact (ideally very little spent in adjustment). 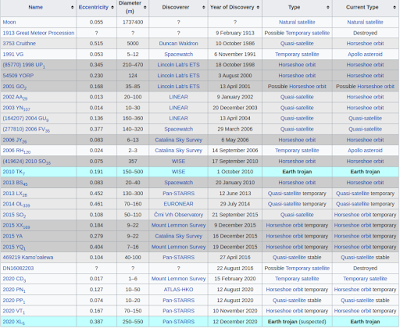 Inspired by Daniel Suarez Delta-V novel. As a Developing Worlder - and being able to see other developing world industries when I join ERPNext free training (South Asians, South East Asians, Africans etc...) people who are also too poor to afford $1000/mo/user Ops Software (SAP) for their Businesses Our Current ERPNext deployment has been costing about 300usd so far BUT 1000 "Cheap 3rd world Manhours" myself included.   I feel like a BELTA - high tech but crippled by missing basic necessities. The muddiness of a "POOR" world - when you say Poor to an Educated 3rd Worlder you can see the System of Oppression and Abuse and the cultural inertia in our Gov't Bidding systems, centralization of power, and the Zero-Sum elements in the culture. I see the intrigue, biases to overcome, the technical hurdles of an uncertain market: TONS of rolls needed but the Finite ACTIONS the PCs can perform.

3)  TIR imagining ENGINES and Spidery and Web Scaffolding being re-arranged by Drones, in Days the engines will be deployed by the crew to STABALIZE the asteroid first (which was calculated already prior to arriving with fine adjustments now that they can make more accurate density and mass calculations on its surface), then orienting it. A nessessary but quickly obsolete prospect when Lunar iron mining become developed. Mining on the Moon, on Mars, Psyche and Jupiter all have efficiencies and trade offs and unexpected market fluctuations that allocate infra in ways that over hundreds of year will naturalize to self sufficiency for these local producers. 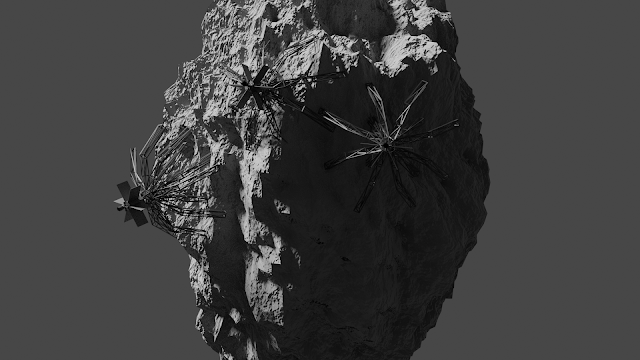 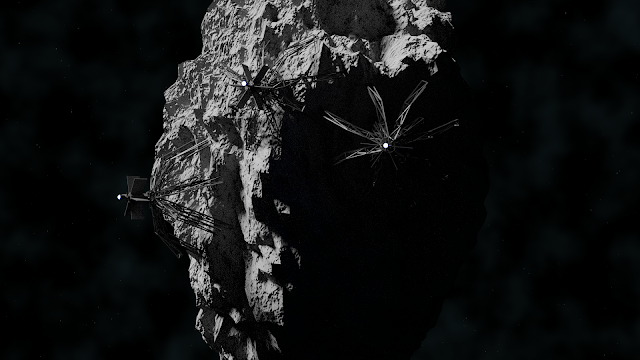 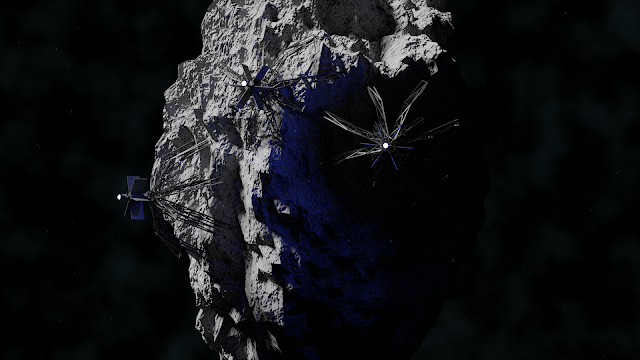 Posted by justinaquino at 11:38 AM