Impact of Migrating from OGL 1.0a to Creative Commons

While Ryan Dancey says Hasbro Cannot Deauthorize OGL reviewing the analysis of The Rules Lawyer I don't that is true. And that's why WOTC/HASBRO agreed to Ryan Danceys Terms in the first place.

On the matter of the De-Authorization. Earlier in the document it's clear they can change the terms. So OGL 1.1

Alan L. Bushlow in 8:20 second mark is, explains the consideration of Perpetuating the Game people get in consideration/exchange for using the material. In basic contract law - as part of any Biz operations knowledge - particularly the rules regarding considerations.
DeAuthorizing was discussed in 14:30 - "Can you deauthorize? Because to de-authorize is an internal contradiction the clause as they already mentioned, you can just use a different authorized document: a tautological Loop.

Its a Tautological Loop because - You cannot De-Authorize this VERSION, because once you do Then THEY CANNOT MAKE a NEW SET OF TERMS. Once you deauthorize it's like there was never a document to begin with. So "We have no existing terms and conditions.
https://en.wikipedia.org/wiki/Open_Game_License#3rd_Edition

In 2004, Wizards of the Coast addressed what would occur if the license was changed – the OGL "already defines what will happen to content that has been previously distributed using an earlier version, in Section 9. As a result, even if Wizards made a change you disagreed with, you could continue to use an earlier, acceptable version at your option. In other words, there's no reason for Wizards to ever make a change that the community of people using the Open Gaming License would object to, because the community would just ignore the change anyway".[6]

The thing about the contract and having said this MUCH earlier like in 2004 means that as a Living document - These terms will not be changed.

13. Termination: This License will terminate automatically if You fail to comply with all terms herein and fail to cure such breach within 30 days of becoming aware of the breach. All sublicenses shall survive the termination of this License.

What does it mean to Open GAMING?
The thing is, THERE IS STILL AN OUT - de authorizing or rendering OGL 1.0a NILL means MNEME and many of the other OGL content is orphaned. We STILL OWN our works: we cannot refer to Traveller or D&D.

ITS NOT ALL BAD. my obsession with Rewriting the RULES to be more intuitive and streamlined is helping create the foundation for an Open source system. I know I'm not the only one who's been working to make OPEN SOURCE GAMING  but its time to band together.
When they are talking about Digital Material - and I'm exposed to Frappe.io  because it was the Low Code platform ERPnext was built on.  We're going to make not just Open Gaming tools but make them creative commons. 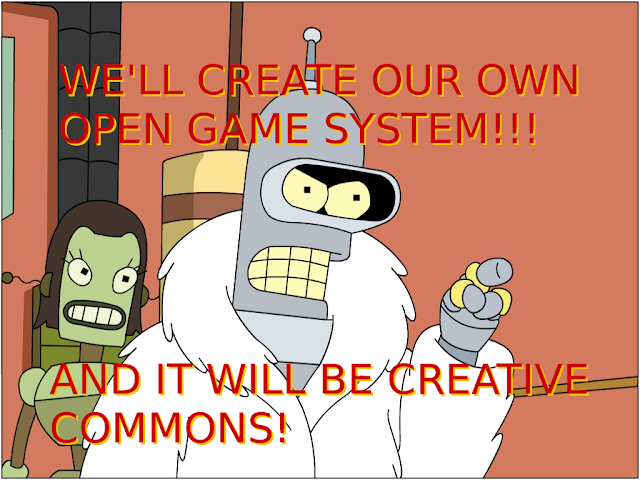 My Favorite thing about Open Source is that the PEOPLE WHO BUILT IT get the credit. Even if Game in the Brains material copied by others - the way we improve and add to it is the brand.
I need a Plan to Transition - basically DE-listing my stuff from OGL 1.0a in the future. if things were not already COMPLICATED it gets even more Complicated.

Posted by justin aquino at 8:48 PM