GURPS modern fantasy began where we left off,

When we last left the adventurers a the bar blew up when a demon made its appearance. Mr Big is now a firey demon thats curious to wonder why a bunch of "pricks" decided to get in the way instead of having the good sense to leave when they should.


Osman and Thomas strike a conversation with Mr. Big while Tasha and Speedy escape with Jeni. Things get heated when Thomas tries to "make a deal with the devil" where his keen negotiating skills is provoking the demon and drawing him closer. Petier had the good sense of taking Osman to safety, and covering Thomas with a long burst at center mass against the demon. It made a small dent and gave Thomas the breathing room to make a break for his bike.

Mr. Big would have removed any hope of escape if not for the appearance of another creature which takes offense at the demons disregard of maintaining "the Veil". They called each other names and went at it. The party took the opportunity to escape but encounter more of the thugs. Tasha confronts them and despite their number cautions them enough for help to arrive. Speedy was that help and stuns everyone with a well placed Flashbang, but Tasha and Jenny were still also stunned. One thug manages to avoid being stunned and stabs Tasha with a machete bringing her down. Petier makes his way to clear the area shredding a line of thugs. When the thugs recovered, speedy manages to  use a towel and bull their head to strike the ground and does that twice with the remaining thugs.

Thomas manages to take out two machete wielding thugs expertly with this gadget spear, and reach his heavy sports bike and roar away. 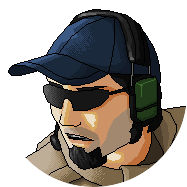 
Scene 02, Episode 02: the Obligatory Chase scene!
The thugs followed after in a two 2-door SUV, a Jeep, Heavy SUV, and several motorcycles. Speedy gets his quad rotor drone up to view the traffic and aid the drivers efforts. Tasha expertly drives past traffic and puts most of them behind. The Jeep and the SUV manage to keep up, but are too far away. They shoot but can't hit.

Mr. Big joins the chase, jumping from car to car trying to catch up. He is followed by the giant canine creature, Thomas runs interference slashing tires with his long blades, causing one SUV to crash and another to stop suddenly. The traffic compounds, when Petier unleashes a mess of smoke grenades it becomes terrible.

Fortunately Thomas is a local expert, and manages to take his bike off the main road and through the shanty settlements that grow from the shelter of the highway. He crashes through several shanties but is able to avoid the worse of the traffic. Speedy calls him and asks where best to go, there seems to be one clear choice other than the heavy residential zone, its the warehouse and industrial district mostly abandoned by the 2009 economic collapse.

Tasha guns the Humvee and Thomas with his superbike and open road quadruple the miles between them and Mr. Big