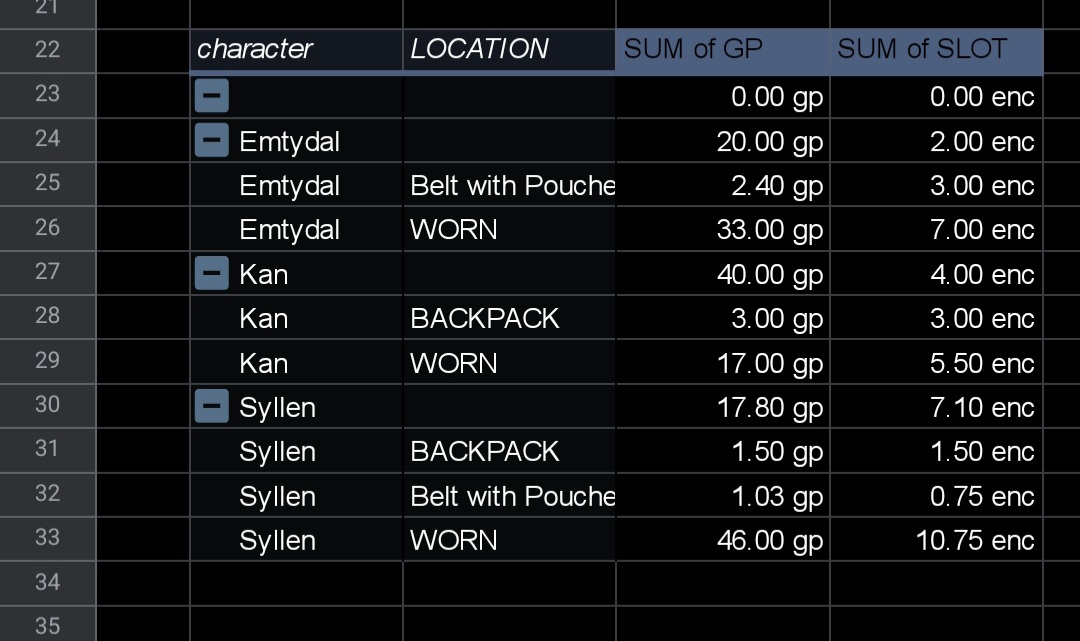 What I take pride in as a special ability is thinking in pivot tables and data arrays. (see link, solving the problem - how to organize gear in a way that characters can have a certain amount of slots and those slots are linked to containers and their gear)
I got a lot of practice in TRPGs, creating traveler ship spreadsheets as well as making a lot of spreadsheets for games.
Some people find this tedious but I find it fun because it is not purely a logic problem but a visual spatial problem for artists with strong logic like me.
So basically the World Generator Spreadsheet, SHIP generator Spreadsheetd and many other tools are part of the products we make for Mneme.
In Mneme Variant Combat Rules I made a special load-out generator Spreadsheet so you guys who do detailed load-outs can generate them quickly. (Mneme Variant Combat Rules, everything is reviewable prior to purchase). 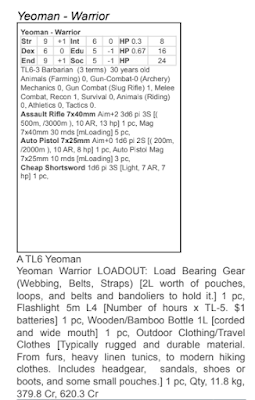 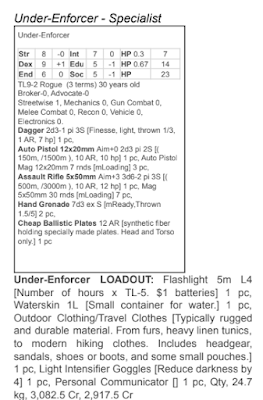 I sadly didn't do the marketing to showcase it, which I will correct.
But I have a new and better mechanic for GMs who want to make this fun and easy.
What is in your Gear is a function of Time to Prepare, load and Intelligence/charisma/wisdom. Let's draw from index card rpg (see drivethrurpg)

1) You have a number of slots equal to your strength. X2 strength is a disadvantage and half speed of stuff. Set what amount of Load the character will be taking.
2) So in downtime, every scene (a scene one roll challenge worth of interactions using the mental ability ) the player can fill a number of slots with "stuff". The player notes down the kind of stuff they will get.

3) Opportunities (Time) to do these Downtime scenes is up to the GM and players' OPPORTUNITY costs.

4) Each stuff has a load value. You can only call on stuff you've had the opportunity to acquire. Every time you need the stuff the GM and players note how much of the load has been occupied. Until the total Load out is reached.

I need bandages, crowbar, etc... mark it off and deduct it from the Load. Until you reach the maximum load that character can hold.

No more long lists of stuff up Upfront. You Can detail it as you go.
Anecodote:
So we had one session of shopping. That's not a bad thing as it shows off the town. Of course, after the session will do homework on detailed shopping lists and spreadsheets.
OBJECTIVE: To remove that burden the proposed method will make everyone's job easier. At the end of the day key words are collected and the players just check if they made or they acquired it. every time they pull out stuff from their Loadout mark if off.
I recommend the anime trope of flashbacks and how they got the stuff If they have a strong story influence or shifts alot of the plot.
You can use Lbs/Kg or Encumbrance Slots - it doesn't matter with this system. What matters is that you deal with the details WHEN you need the details. going into World Building vs Players getting engagement is the conflict we seek to  address. GM wants to world build but players want to get to the action. BOTH can be achieved. the same way Taking Minutes during the meeting on a Shared Doc in Clear ACTION statements means no more minutes AFTER the meeting, kanban (the action of moving items is itself a Signaling System) and Andon Systems (the safeguards are built in, when constraints kick in it signals downstream errors outside control ranges) are all about actions that are very efficient (doing more with less motion)
These skills I use and developed in gaming are how I fix the Accounting Collection billing, the Sales reports, the analysis of salaries etc... And automate a lot of the ticketing.I train ojts in these skills (creating Tables, identifying which information goes into ROWs and Columns) hoping they will use it to stand out from the others because they can master data tables.  We've trained engineers, psychology grads, and IT in this. We hope to train accounting and biz admin students in the future.
Combined with Nicco information design abilities we hope Mneme will get enough people to like it and afford to grow.
Oh the fact that we are artists, animators, science geeks, and Jack of all trades jumping into every skill needed. Do people like Game designers who apply LEAN/TPS and AGILE in game design? I guess they wont care except for the results. As a veteran of Process Improvement - the ritual can be very comforting even if Inefficient - helping people seeing past their Ritual to look at how they Impact Players and GMs (ALL STAKEHOLDERS) requires a lot of marketing and STORYTELLING.
Telling the story - I love your world building but lets squeeze in a Quick combat in the session? And the GM breaking into Scenes they plan to have - to budget their time
Seth Skorkowsky touches on this specifically in Long Social Interactions (video on the 15 min mark) - to in effect he says "real conversation is actually meandering and unfocused BUT in stories they have to be to the point and efficient in the scene" that's the thing - if you budget your time (pomodoro technique) to a Single Roll per scene - then you have to master getting to the Point and what engages the players.

His examples are GREAT - and are techniques for GMs and Regular people can have in their arsenal. In the REAL world this gives you a strategy when communicating to stakeholders - Do you meander or do you Focus OR how do you smoothly transition to your desired topic.

TRPS are always a great way to HONE thinking and speaking skills in the real world - play is designed to make humans safely try till they master skills. feeling good when we master small feats is part of the enjoyment of TRPs.
Posted by justinaquino at 12:02 PM